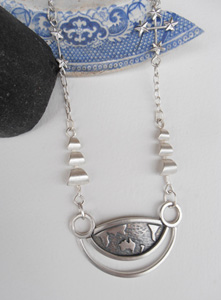 Geelong Sculptors annual exhibition is on at Deakin University’s city campus for October.  This exhibition has inspired artists to uncover the maritime and wool industry heritage that helped establish #Geelong as an important city in Victoria.  Clippers by the Bay has inspired works in steel, silver, clay, timber and found objects.  Head to facebook.com/geelong sculptors for more detail.

My pendant was inspired by the treacherous route that early sailing ships used from Britain and Europe to get to Australia’s goldfields FAST in the 1850′s.  63 days was an early record for the clipper ship #The Lightning. Using the #Great Circle Route  the ships rounded Cape Horn far south to reach the “Roaring Forties’ – the westerly winds between 40 and 50 degrees latitude that would sail them across the Southern Ocean.  If contending with storms and floating icebergs at that latitude was dangerous they then had to negotiate Bass Strait and the notorious Rip – the entrance to Port Phillip -to make it safely to Geelong and Melbourne and their new life.

Studio – open only by appointment